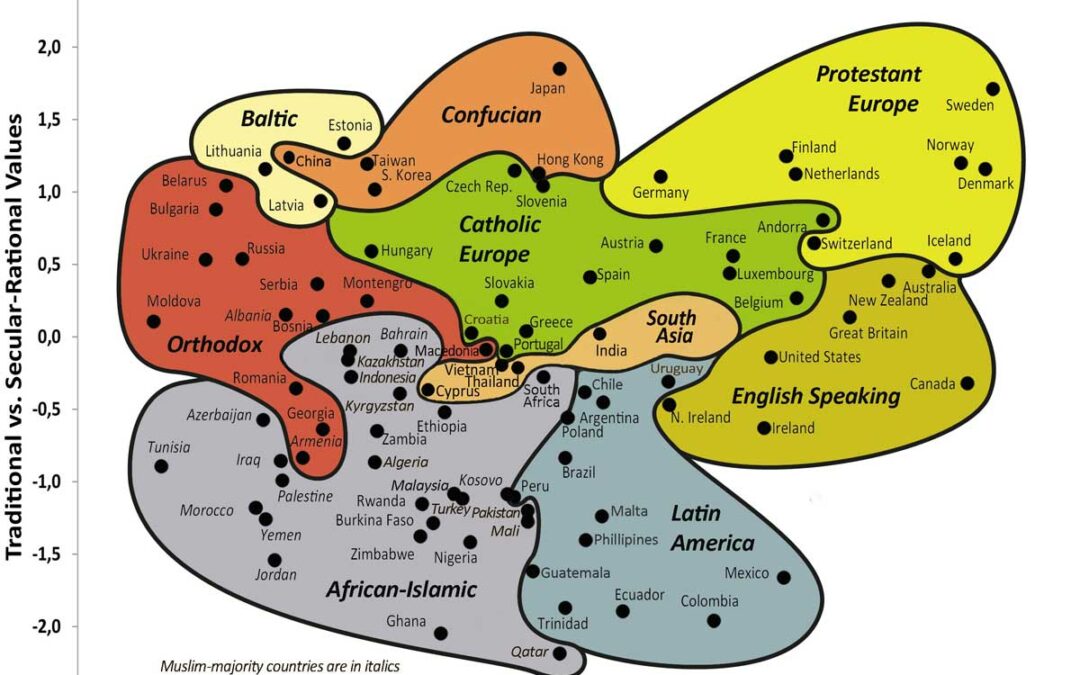 First, let me say this is not an article for budding sociologists or business leaders who think that the last 20 years of increased person-to-person connectivity across the world, with the Internet, social media, entertainment and globalization, have broken down the differences in cultures across the world. The world has changed to be sure, but not on the scale you might imagine. People across the world still see things differently and interact based on their point of view, and that is as true in business as it is in international politics.

Culture actually takes a long time to change, whether we are considering an established business or even more so, a country or region. Studies have shown that the recent growth in communications across the world has only added to the social stereotypes we have to cut through to understand individuals from other cultures. And this is not to say that everyone within a culture will have the same values and drivers. While sociological texts provide many comparisons between cultures, they are at best, a general understanding of the expectations of people inside a society and how they interact with each other.

But at a business level, for a company wanting to outsource software development, what does this really mean? Why should you care? Software development is just a form of work and technology is pretty ubiquitous in the modern world. If people have the skills and experience to do the work wherever they are located, do their cultural values matter?

To investigate this question, let’s imagine a scenario that we (as an nearshore outsourcing vendor in Mexico, serving clients in North America) can relate to. You are starting a project with an agile software development team located in the central area of Mexico. Your team is located in the US Plains region. You might assume that because Mexico is just south of the border – they would know a lot about your culture – and you would be right. People in Mexico and the US consume a very similar range of entertainment and consumer goods and they cross borders in both directions for vacations and visiting their families. But does that fill in the gaps in understanding generated by sensational news reports and differing political agendas on each side?

Sadly, no. Although people in the US visit Mexico in increasing numbers every year, their destinations tend to be resort enclaves like Cancun. Unfortunately, those locations have more in common with the US than Mexico – with good reason. They are intended to make a US and international traveling public comfortable during their stay in another country, not confront them with challenges of language or culture.

On the other side of the coin, people in Mexico generally have relatives in the US and many have visited at different times, outside of the vacation areas like Disneyland. They have a good general understanding of US society, but in most cases, from an outsider’s point of view, even if they have been a resident of the US for an extended period of time. So, while people in Mexico have a fairly good understanding of US social interactions, it may not translate to an easy transition to a working team without some additional understanding and work on both sides. 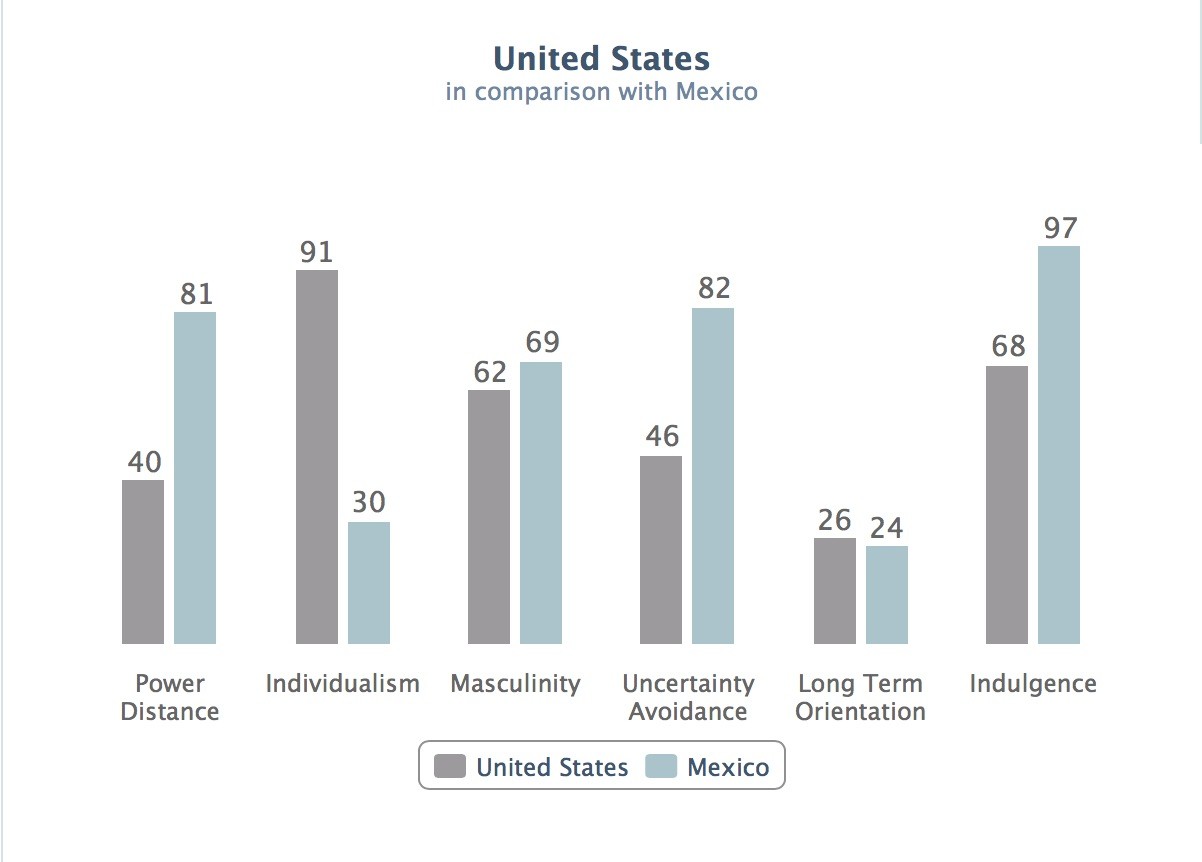 To understand the differences between the two cultures, take a look at a comparison between the US and Mexico as outlined by studies done by the Hofstede Center.

Hofstede measures cultures based on six areas (adapted from the descriptions provided by the center) :

From the comparisons generated by the surveys behind the studies, You can begin to see some basic differences between the expectations of people in the US versus Mexico:

Understanding these basic differences however, doesn’t tell you a lot about how a team of individuals might deal with a business situation. If you imagine a situation when the Mexican team is faced with working over the Christmas holidays to meet a deadline – you might expect some strong push-back because of long-term family traditions and expectations. But you could also expect that in the end, the team would go along with the need because of the value of having work and stability over the long term. But, if you didn’t understand underlying cultural expectations, could you also provide enough incentive to ensure production would not suffer during the period? You could generally expect that some special indulgences for the team would help, but what would really drive them?

Dealing with a specific problem requires more than a general understanding of a team’s cultural distance from your society. There are many layers of the cultural onion, including at a minimum societal, business, and individual levels, that impact the way a team interacts. Almost no one in business today has the time or resources to do the work required to really do a “deep dive” into comparative cultures to find a perfect match for their project.  It is important to know we have cultural differences between us when we start a project, but from a pragmatic point of view, it is more important to know how to bridge them than to find “someone just right.”

Bridging the cultural divides goes back to best practices in starting all outsourced projects with remote teams – the initial period of team formation and alignment. Getting teams together, face-to-face, is critical to breaking down barriers and creating an atmosphere where cultural understanding can grow. You can’t expect either side of a team to change their own cultural profile, but you can put them in situations where their awareness of cultural norms within the team is improved and their ability to work together improves. Direct communication and interaction, in both work and casual situations, opens up opportunities to remove stereotypes and replace them with real, dimensional understandings of individuals.

In the end, the simple fact is that there are cultural differences between teams, even in the same company and in the same region. The cultural studies available should simply reinforce that understanding and the importance of dealing with them, not drive you away from using outside teams. You cannot use studies that give you only a general understanding of society to understand a specific team, although they may help you understand where to start.

From that point of view, if you are interested in finding an outsourced team, vendors that understand cultural dimensions and have ways to deal with them from the outset are going to be your best bet. Particularly in agile or DevOps implementations, trust and understanding are among the most important parts of team formation. Scio provides outsourced development teams to our nearshore clients in North America, with the elements necessary to ensure success, including team building approaches to fit your specific situation and assignment. Our teams have less geographical distance and more working-hour overlap than offshore providers which lowers the issues that new teams have to deal with at the outset. We would be glad to discuss your next project and how we can help.

Now we would be happy if you could help us share this page on your social networks so that we can reach more people who need help in these areas or are looking for a software development partner. All you need to do is click on one of the buttons below. Thank you very much!