Looking for a partner to build an app?

Software engineering is a multifaceted process that often entails numerous steps before a program is ready to be launched. It is for this reason that the development community has implemented the idea of working methodologies. Working methodologies, sometimes referred to as the software development life cycle, is the process of planning each phase in the creation of a program. There are two primary methodologies that can be applied when developing software applications and they are known as the waterfall and agile methodologies.

The waterfall methodology is the traditional cycle in which software is created and it is noted for its sequential development approach. This means that each phase in the development cycle is laid out in a well-structured manner. Typically, there are several phases to the waterfall methodology, with these stages focusing on planning, time constraints, and budgets, with the goal of implementing these facets concurrently. In many cases, each completed phase must be approved by the management team before the next stage in the process can commence.

The agile development process encompasses a range of different methodologies which revolve around the concept of iteration. Unlike the waterfall methodology, where software is developed by a single unit, the agile development process involves multiple team members each working on a different aspect of the project. This allows applications to be developed rapidly, making them deployable at nearly any stage during production. The agile methodology is known for being particularly useful in applications that require frequent updating.

Interacting with the Development Team 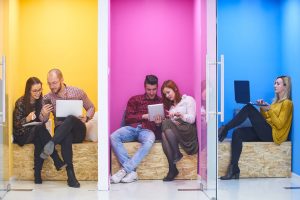 As mentioned, there are varying approaches that can be taken when developing software programs, and some of these, most notably agile methodologies, require the commitment of an entire team of developers. This concept of working as a cohesive unit during production is known commonly as Scrum. In a Scrum environment, developers work closely with one another, often through online or face-to-face interaction. This high level of interaction helps increase the flexibility with which applications are built by allowing for a more holistic approach.

The Scrum concept recognizes that the needs of customers are continually changing, and therefore, it is necessary to have a system in place that can easily adapt when changes are required. Whereas the waterfall methodology of creating programs uses a strict set of guidelines for developing applications, Scrum makes it possible for developers to quickly remedy problems and tailor applications to meet the customer’s specifications even after deployment.

There is an array of software development methodologies that can be implemented when creating applications and each of these has its own set of characteristics. The traditional approach for building programs, known as the waterfall methodology, focuses on individualized steps with the goal of a simultaneous launch. While, on the other hand, agile development methodologies utilize teamwork to create a highly communicative and flexible environment. If you are a non-developer with an interest in the software development process, it is important to keep in mind these key development concepts.